In this week, we should write a report about a part (Architecture, Pure Creation of the Mind) of Towards a New Architecture, Le Corbusier that we read and a video of Bernstein (What Does Music Mean ? ) that we watched two weeks ago to prepare a digital poster.

In this text, Le Corbusier reflects his exact manner and thoughts about architecture. In the beginning of the text he expresses that profile and contour are the touchstone of Architect (When I have done a quick research about touchstone, I understand that touchstone uses a gauge to specify the quality of a thing.) because they reveal either an artist or absolute engineer and when the art enters in, architecture is formed, he mentions that in work of art, there must be a unity of aim, clear statement and its own special character and all this associate to us a pure creation of mind.

He draws attention to axis of organization and he clarifies it like that, this axis leads us to presume a unity of affairs in the universe and he says that the reason of appearing the results of mathematical calculation satisfying and harmonious to us is proceeding from the axis.

Le Corbusier approach critically a topic that certain writers’ exposition. This topic is inspiring from nature. Certain writers have predicated that Doric column was inspired by a tree springing from the earth. However, Le Corbusier expresses that it is false and he exemplifies this thought with columns in Greece.

In the video Bernstein talked that notes are not like words at all, a word has got a specific meaning or when we say a word spontaneously its image comes to our minds but if a note is played, we have not an idea about its meaning because it doesn’t have a meaning. In other words, nothing has no meaning by itself but when some things come together with rhythms, combination and at the same time with a unity and also within the tramework of a plan, they create a whole.

In this assignment, we have watched some videos about structural notion within poetry and structural principles of poetry work. What is expected to us making and observing structural analysis of a small production or manufacturing counter such as shoe making, jewelry making. I explored with my friends and we found a shop that make jewelries and the owners’ of shop helped us really much.

This is my story board about making gold bracelet. This process progress with these putting in order : gold melting, casting, formating as a roller, weighing down, belting down, designing, filling, drawing a specific figure and cutting this figure from goldplate then combining them together, cleaning up with oil of vitriol, rubbing and polishing the figure and recessing for brilliant and gluing brilliant and magnificent outcome. 🙂

For taking architectural photos to prepare a photo essay we walked from Kolej to Ulus. There were lots of stops to pay attention and know the significant buildings and their historical background on our route. This was a difficult experience for me because of both weather ( the weather was rainy and cold ) and photography techniques. Because of not to know how I should take architectural photos, I tampered my camera’s settings so my camera was destroyed and I used my friends’ camera.

This one again a poster about text and video. Our instructors gave us chance to reorganize our poster because our first poster didn’t involve what is desired to us and this is my new poster. I watched out angular alignment and I divided into two groups by using two different color. One is keywords from text and the other is keywords from the video and I used textural background to avoid figurative reference.

In this assignment we should test the spatial configurations achieved with the introduction of the light source by taking photographs of our first model (spatial abstraction model) through the light box and we should revise our models according to the datas; light, shade & shadow in order to achieve further spatial effects and again we took photo of our new model from the light box. 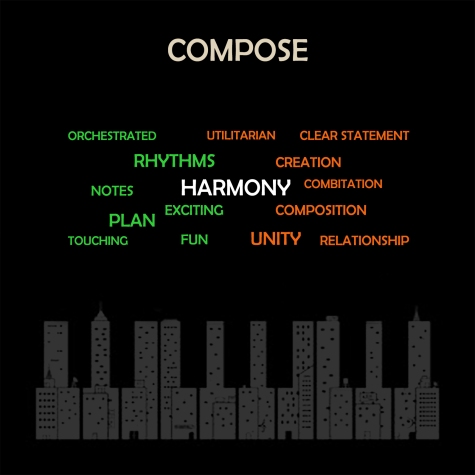 I study with a text ‘ Pure Creation of the Mind ‘ that written by LE CORBUSIER and a video ‘ What does Music Mean? ‘ by BERNSTEIN to make a digital poster. My poster should be in size of 27×27 cm and I should derive some key-words from the text and video and the poster should have an alternative single title. While I was creating this poster, I have used lots of reference line to decide how the words should place on the poster and I want to draw attention some words by using different point size and the reason why I have used three different colors key-words is emphasizing the key-words from video, the key-words from text and the most common key-word that is used both in text and video and the reason why I chose this background is an object that help me with its reference line rather than a figurative mean while I was arranging my poster.